You (and I) would think that the representation of data table semantics in the accessibility tree, complete interoperability implementation in browsers, expert advice on marking up accessibly and mature feature functionality in Screen Readers, is a given… Time for a beer.

A really simple table, with one row of or column of table headers in row 1 or column 1

Table with header cells in the top row only

Now sit back, relax, take a long sip on that cold beer: 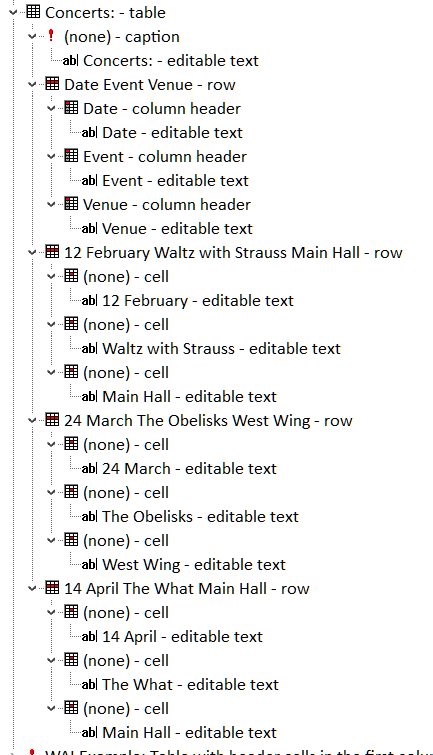 Table with row headers in the first column only

Things work a bit differently on Mac, there is no explicit role differentiation between header and data cells. All have a role=AXcell. The row or column headerness of the elements is expressed by being referenced as items by cell Row Header UIElements and/or Column Header UIElements properties.

See the Pen Table headers in top row or first column only by steve faulkner (@stevef) on CodePen.

Note: I have gathered the table navigation commands for various screen readers in one location, principally as I keep forgetting them, but also it may be helpful to you.

I have broken down the details by Browser and Screen reader:

Using Ctrl+Alt+Arrow Keys: when entering a column or row, the row or column number of the cell is announced, followed by the header and cell content. For example:

Using Ctrl+Alt+NumPad 5 to announce the current cell
details, the row and column number of the cell is announced, followed by
the header and cell content:

Using ctrl+alt+Arrow Keys: when entering a column or row,
the header related to the cell is announced, the row or column number, followed by and cell content. For example:

Note: NVDA does not have a keys stroke combination like JAWS to announce the current cell details.

Using Arrow Keys: when entering a column or row, the header
related to the cell is announced, the cell content, followed by the
row or column number. For example:

Using VO+C+C to announce the read content of table column:

“Event”  “Waltz with Strauss” “The Obelisks” “The What”

Using VO+C to announce the content of table column:

Using VO+R to announce the  content of table row:

VoicOver, same as with Chrome 71.

Drink to the browser engine that was – Edge

Given that the recent news that the Edge browser engine is to be replaced with Chromium,
discussing how tables are supported in Edge is somewhat moot. Microsoft has indicated that as part of its future contributions to chromium will be to add UI Automation support. So what we see today could be indicative of what is implemented in Chromium.

For simple tables at least, browser and screen reader interoperability is good. Developers need only use <th> to identify column or row headers and modern browsers take care of the rest or in the case of IE11 screen readers fix its brokenness. I realise that this article does not cover all screen readers and platforms, feel free to use the test cases to test and feedback any new data — thanks!

And please realise this is only 1 beer’s worth of testing. Will have to invest in a slab of stubbies to tackle more complex tables…

Music to test tables (and drink VB) by:

The post Tables and Beers appeared first on 24 Accessibility.